(Reuters) – Wal-Mart Stores Inc has long used its commercial might to forge a global supply chain with ruthless efficiency. It now has a new target: U.S. wheat fields. 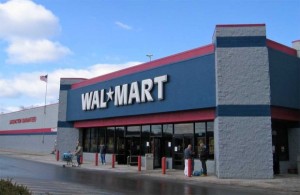 As part of efforts to reduce its carbon footprint and burnish its image as an environmentally responsible company, the huge retailer is sending senior employees into the fields for the first time ever, looking for ways to help farmers reduce their use of carbon-intensive fertilizer or improve logistics.
“We don’t have a lot of visibility in the supply chain, so we started in the field,” says Robert Kaplan, a sustainability manager at the Bentonville, Arkansas-based firm. “I hadn’t seen a wheat field before and I wanted to find out how we go from a green crop in the fields to flour on our shelves.”

This May, Kaplan and a colleague were the first Wal-Mart employees ever to attend the annual crop tour across the No. 1 winter wheat state Kansas, a rite of passage for traders, analysts, academics and buyers for the past 55 years.

The aim is simple: use Wal-Mart’s commercial muscle to get its Great Value-branded flour and wheat products from field to shelf more efficiently, using less carbon.

In the process, however, Wal-Mart may end up initiating transformative changes in the way U.S. farmers grow wheat, lowering costs and improving yields for a crop that has failed to keep pace with the dramatic improvements in sustainability of other commodities such as corn and cotton.

There are some relatively easy wins: convincing more farmers to abandon the practice of plowing their fields after each harvest, and using satellite imagery to optimize fertilizer use.

But the challenge is substantial. Wheat is already one of the least-intensive crops in terms of nitrogen fertilizer, using half as much as corn to produce an acre of grain.

“Wheat is relatively low input. There are not a lot of corners that can be cut,” says Jason Kelley, a wheat and corn extension agronomist at the University of Arkansas.

In the last three decades, better farming practices, such as reducing tillage, have resulted in a 15 percent drop in greenhouse gas emissions in each bushel of wheat grown in the United States, according to a soon-to-be-released study by Field to Market, an alliance of national farm groups and more than 40 companies including Cargill and Kellogg’s (but not Wal-Mart) that are seeking to enhance sustainability.

But those gains pale in comparison to other major crops. The amount of water needed to irrigate cotton fields has dropped by 30 percent, according to the study; soil erosion in corn farming has declined by 67 percent since 1980.

As it continues to buy more and more wheat to support its in-house brand, Wal-Mart believes it can use its muscle to bring changes to the agricultural landscape by getting farmers to adopt more progressive techniques and labeling the flour they sell as a sustainable product.

In 2010, Wal-Mart’s store brands had a 4.4 percent share of the $14.35 billion U.S. packaged and industrial bread market, up from a 3.7 percent market share in 2006, according to research firm Euromonitor International.

About 40 percent of U.S. wheat is used for food. Wal-Mart declined to specify how much wheat it buys directly or through its suppliers.

He said that, while it is still in the fact-finding phase of its wheat work, Wal-Mart is likely to promote “precision farming” which uses satellite-guided planting to improve yields and no-till methods which proponents say reduce soil erosion and maintain land quality.

Roughly 75 percent of wheat farmers plow, or till, their fields in Arkansas, says Kelley. Abandoning that practice could require them to rotate crops regularly and take greater care in planting to avoid stunting plant growth.

“Wheat is one of the later adopters to no-till or zero-till,” said Stewart Ramsey, a senior economist at analytics firm IHS who works with Field to Market.

If anyone can drive efficiency into the generations-old practices of U.S. farmers, it’s Wal-Mart.

“Having world class logistics and distribution is the core of their business and what they’ve increasingly been doing is looking to apply those capabilities across the broader supply chain, going further upstream into production and processing,” says Stewart Samuel, a senior analyst at global food and research firm IGD.

The company has embarked on an effort to eliminate 20 million metric tons (22 million tons) of greenhouse gas emissions from its global supply chain by the end of 2015, the equivalent of taking nearly 4 million cars off the road for a year. It declined to say how much of the company’s total emissions that represented.

Last year, the company installed more efficient lighting in its stores in the United States and Mexico and also delivered more goods even as its truck fleet drove fewer miles.

As one farmer told Robinson and Kaplan about how he used manure from nearby cattle feedlots to fertilize his fields, they wondered about the feasibility of hauling manure from U.S. poultry producers — predominately in the mid-South — to farmers elsewhere in that region or to the U.S. Corn Belt.

“We’re an expert in transportation. What if we could find empty trucks going from one place to another that will help farmers get something they need?” Robinson said.

Tanner Ehmke, who grows wheat in western Kansas and met with Wal-Mart during the tour, said: “From the farmer’s perspective that is a great idea. Manure is a fantastic fertilizer.”

“The question is whether it would pencil out, costwise,” Tanner said.

He’s not the only one asking that question.

“Hopefully, sustainable flour becomes an everyday business practice,” said Robinson as the tour paused in Wichita, Kansas. “We can’t do this if it costs more.”