The Long-term Solution Must Be To Promote Truly Sustainable Agriculture Both In Small-holdings, Which Continue To Produce The Majority Of Africa’s Food, And Large-scale Commercial Farms 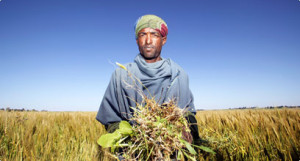 Nothing better illustrates the crucial role that science must play in farming in Africa than the contrasts in agricultural productivity between our continent and the world as a whole. For while food productivity has increased globally by 140 per cent in recent decades, the figures for sub-Saharan Africa over the same period show a fall.
This is not because of any lack of effort by Africa’s farmers. Agriculture remains for far too many an exhausting dawn to dusk occupation for very little reward. Indeed, it is because farming across much of the continent has changed little in generations that the role of science is so important.

For what these dismal figures underline is how Africa’s agriculture has been cut off from the scientific advances which have transformed yields in many other parts of the globe. The breakthroughs on crop varieties, fertilisers and pesticides, coupled with new agricultural techniques which are now taken for granted elsewhere, have remained out of the reach of African farmers.

So, too, has the investment to put them into action. We can see the impact of this neglect across our continent. One in three people in sub-Saharan Africa are chronically hungry, the highest proportion in the world. Many more suffer from consistently poor diets.

Malnutrition is a catastrophic brake on progress, damaging every aspect of life. Malnutrition throughout pregnancy and childhood stunts development, increasing vulnerability to disease and reducing capacity to learn at school.

All of this feeds into the wider economy and society with increased health care costs, poorer productivity and economic growth. And if this was not bad enough, climate change is making these challenges worse. Africa’s citizens may have done little historically to add to the carbon emissions in our atmosphere but that does not mean our continent will escape its impact. In fact, productive land and water supplies are already being reduced.

But our experience in Ghana shows just how harnessing science can help transform agricultural productivity. By giving farmers access to the latest scientific knowledge and crucially, providing them with the support to make full use of it, the results can be truly remarkable.

Cocoa production, a vital cash crop for Ghana, has been virtually tripled in a decade. There have been dramatic increases too, in cereals, and staples such as plantains, yams and cassava. Within a decade, Ghana went from a position where we failed to produce enough food to feed our own people to producing a healthy surplus for export.

As we have seen in many other parts of the world, the transformation in agriculture is a powerful driver for wider progress. Ghana became the first African country to meet its Millennium Development Goal of halving poverty seven years ahead of schedule.

While this dramatic improvement in Ghana’s agriculture is perhaps the most sustained example of national success, the achievements are by no means unique. Across Africa, where a strong partnership is being forged between science, farmers and national governments, we are seeing similar impressive results.

The task now is to strengthen and expand these partnerships, a central aim of the Pan-African Chemistry Network which is meeting in Ghana this week. I pay tribute to the Royal Society of Chemistry and Syngenta for its role in supporting this vital academic collaboration.

For there is a great deal more to do. Despite progress, farm yields in Africa still lag badly behind the global average. We need to bring together research institutes from across the continent and beyond to develop new crop strains which can flourish in African conditions.

With rains becoming more irregular, this must focus in particular on crop varieties which can thrive on less water. We need as well to develop new farming techniques which make the most of every drop of water there is. One of the major reasons why farming yields in Africa are behind those in many other parts of the world is that only a small proportion of land under cultivation is irrigated.

This offers real potential for increasing harvests. But as climate change continues and pressure on scarce resources increases, we have to find ways too, of growing more with less water. Water-related issues are compounded by a multitude of other challenges.

Transportation of foodstuffs from rural producers to cities is severely hindered by poor roads, driving prices ever higher. A lack of storage facilities means that produce often begins to rot before it can be sent to market. The inability to process foodstuffs locally forces developing nations to export their produce cheaply and purchase final products at higher costs.

The long-term solution must be to promote truly sustainable agriculture both in small-holdings, which continue to produce the majority of Africa’s food, and large-scale commercial farms. We need a combination of both working together if we are to meet the continent’s food needs now and in the future.

As this week’s conference in Accra demonstrates, we are seeing a determined effort by the scientific community to collaborate to find solutions to Africa’s agricultural problems. If we get all this right, and both national governments and donors provide the investment needed, the future for farming on our continent is bright.

John Kufuor, who was President of Ghana from 2001 to 2009, is the 2011 World Food Prize Laureate. The Pan-Africa Chemistry Network’s Forum on Agricultural Sustainability was held in Accra, Ghana, 21-23 November.