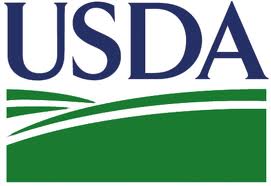 Pacific Northwest farmers plant around 2.2 million acres of winter wheat every year. And every year, between 1.3 to 22.3 tons of silt-loam soil erode from each acre in production. 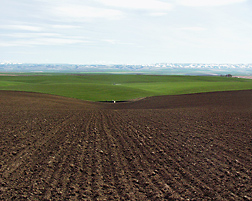 “Sometimes the roads around our lab are covered with eroded soils that are a foot deep,” says Dan Long, who is the research leader at the Agricultural Research Service Columbia Plateau Conservation Research Center in Pendleton, Oregon. “But there hasn’t been much measurement of regional soil-erosion rates at a production scale—only in small square-meter study plots.”

Despite the obvious soil losses due to erosion, Pacific Northwest farmers generally use conventional tillage in their winter wheat production. There was no real data available on how different tillage practices might reduce soil erosion—until ARS hydrologist John Williams began a watershed-scale study to see whether no-till production might help stem soil losses.

“No-till production for wheat has been studied in the Midwest and the Southeast, but we have different issues in the Pacific Northwest,” Williams says. “We have multiple freeze-thaw events every year, and our farmers are working on 20- to 45-degree slopes.”

Two Years of Conventional Till, Four Years of No-Till 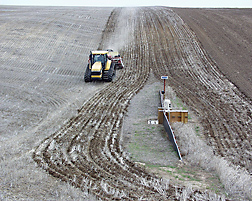 At Pendleton, Williams, Long, and soil scientists Hero Gollany and Stewart Wuest compared runoff, soil erosion, and crop yields in a conventional, intensively tilled winter wheat-fallow system and a no-till 4-year cropping rotation system. The scientists set up research plots in two small neighboring ephemeral drainages in the Wildhorse Creek Watershed in northeast Oregon and measured runoff and sediment loads at the mouth of each drainage channel in the study area.

The scientists discovered that 70 percent more runoff and 52 times more eroded material escaped from the conventional-till fields than from the no-till fields. These findings convinced them that if wheat producers in eastern Oregon and Washington used no-till systems, they could substantially stem soil erosion and enhance water quality and conservation.

“We looked at almost every rainfall event from 2001 to 2004,” Williams said. “Of those, we saw that 13 events generated erosion from conventionally tilled fields, but only 3 events resulted in erosion from no-till fields. This alone says a lot about how effective no-till can be in the Pacific Northwest. It doesn’t disturb the soil surface and it leaves behind crop residue—and it leaves pore space in the soil so that water can infiltrate. Any runoff that does take place occurs over soil that’s protected by organic material, so the soil doesn’t erode.”

“In this case study, there was no significant difference in yields between the two systems,” Long adds. “And from a cost-benefit perspective, direct seeding in no-till production minimizes the trips across a field that a farmer needs to make, which saves fuel and time in the long run.” 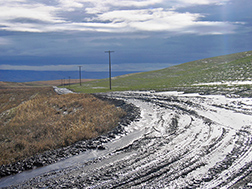 The researchers also found that the no-till soils eroding downslope moved much more slowly over time, unlike more sudden and severe erosion events that are typical of regions with heavy rainfall.

Gollany studied the difference in soil organic matter between conventional-till and no-till systems, and part of her work involved looking at how this difference affected the movement of nutrients from the top of the slope to the bottom. No-till production improved levels of soil organic carbon. These higher soil carbon levels increase soil aggregation—which in turn increases soil stability.

“I expected to see big differences in erosion rates between no-till and convention till, but the magnitude surprised me,” Gollany says. “Until we actually measured it, I didn’t realize how much soil was going down the hill in the conventionally tilled field.”

Wuest shared her surprise, as did local producers. “I presented these findings to farmers in the area, and there were a lot of raised eyebrows when we talked about how much soil and water was moving downhill in conventionally tilled fields,” Wuest says.

Williams used data from his watershed-scale project to evaluate the applicability of the USDA Water Erosion Prediction Project (WEPP) model for measuring hydrological and erosion processes in the semiarid croplands of the Columbia Plateau. WEPP was developed by ARS scientists as a tool that resource managers could use in soil and water conservation and environmental planning and assessment. The WEPP model simulates many of the physical processes important in soil erosion, including infiltration, runoff, raindrop and overland-flow detachment of soil particles, sediment transport, deposition, plant growth, and residue decomposition.

Williams found that when the field data they collected was used to run WEPP simulations, the program produced good estimates for soil water volume and crop yields in no-till and conventional-till systems and for above-ground biomass in no-till production. WEPP simulations of runoff and erosion also aligned with field observations.

As a result of his findings, Williams concluded that during years with below-normal precipitation, mild weather, and little runoff, the WEPP model was able to successfully estimate hydrology dynamics, sediment transport, and crop growth for northeast Oregon’s no-till and conventional-till cropping systems.

“Both these projects go a long way in helping wheat growers in eastern Oregon balance their immediate economic returns with the need for sustainable crop management,” Long notes. “Farmers here really appreciate this work because, for the first time, it measures the environmental differences in no-till and conventional-till production.”—By Ann Perry, Agricultural Research Service Information Staff.

“Testing No-Till Winter Wheat in the Pacific Northwest“ was published in the March 2011 issue of Agricultural Research magazine.