No Till Planting Gaining In Popularity 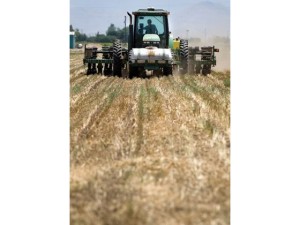 A farming practice that not only conserves fuel and costs, but cuts down on dust, is gaining favor with more and more growers in the region. Conservation tillage, a method of cultivating crops to reduce soil erosion, began about a decade ago in this area and today is being used on thousands of acres. “It’s caught on and more are doing it,” said local farmer and dairyman Eric Borba. His family is using no-till farming on about 1,200 acres. In conservation tillage, crops are grown with minimal cultivation of the soil. When the amount of tillage is reduced, the stubble or plant residues remain on top of the soil rather than being plowed or disced into the soil. The new crop is planted into the stubble or small strips of tilled soil. Weeds are controlled with cover crops or herbicides rather than by cultivation. Sustainable Conservation, a non-profit organization working with the private sector to promote clean air and water projects, is working with UC Davis on efforts to utilize conservation tillage. The practice reduces soil loss through water erosion because more crop residue is left on the soil surface and soil drainage, organic matter and moisture content are improved. Conservation tillage also reduces air pollution (dust and diesel emissions), sequesters carbon (inhibiting global warming), improves water quality and creates wildlife habitat. Between 2004 and 2008, Central Valley farmers switched to “reduced tillage” practices on nearly 20 percent of land used to grow row crops like corn and wheat silage. John Cardoza, project associate with Sustainable Conservation, said that number continues to grow. “It’s definitely a trend that’s going strong right now,” he said, noting the high cost of fuel. As of 2008, Tulare County had more than 63,000 acres under conservation tillage, about the same as Kings County, but more than triple Fresno, Merced or Kern counties. The tillage practices cut the number of tractor passes needed to prepare fields for planting, which means lower fuel and labor costs for farmers, and less dust and diesel pollution in the air. In 2008, Central Valley farmers cultivated more than 416,000 acres using reduced tillage practices. Conservation tillage involves leaving at least 30 percent of crop residue (such as corn stalks) on the surface of the soil and planting a new crop on top. The remaining crop residue protects the soil from erosion and prevents wind from blowing it into the air. Minimum tillage includes practices that reduce the overall number of tractor passes over fields by at least 40 percent. Farmers report reductions in operating costs between 30-40 percent per year. Reduced tillage practices also produce beneficial organic material which improves the soil’s ability to retain water and improves its quality. Borba said his family’s farm has been utilizing conservation tillage practices for the past five years. They are using it mostly on wheat and silage grain – first planting the wheat and then coming back and planting silage corn on top of the stubble without discing the field. “We harvest the wheat, then run the strip tiller with GPS (global positioning). The GPS drives the tractor within one inch of where you want it to go,” said Borba. Then, the field is irrigated and after it dries enough, the seed is placed where the ground has been tilled, again using GPS. The Borbas place their rows 30 inches apart and the till is a foot deep. Under conventional practices, a farmer would harvest, then disc, then rip the soil, pre irrigate, disc two more times, cultivate and plant. The difference is two tractor runs compared to five. “We use less fuel and less water,” pointed out Borba, explaining that the stubble left behind helps insulate the soil so it does not dry out as quickly. There are two keys to the success of conservation tillage farming. One is GPS that allows farmers to be so precise in their planting. The other is using a Roundup resistant crop that allows them to use herbicides to control weeds as the new crop grows. Borba said they apply Roundup before the first irrigation and may apply it once again before harvest if necessary. He said they have been using the practice more each year, beginning with a few acres the first year, then about half of their acres the second year. Today, all their wheat and corn is planting using conservation tillage. As the use of conservation tillage improves, so has yields. Borba said their yields are equal to using conventional farming practices. “As we learn how to do it better, our yields have not suffered,” he said. Equipment to farm using conservation tillage was not even around this area a decade ago, but Borba said today the cost involved in acquiring the necessary implements is nothing compared to the savings — especially with diesel around $4 a gallon. Statewide, reduced tillage practices like conservation tillage and minimum tillage, could cut dust pollution from agriculture by up to 85 percent and diesel pollution in half. That’s good news for the San Joaquin Valley, which according to the American Lung Association ranks in the top 25 most-polluted regions of the U.S. and experiences air quality that hovers at levels dirty enough to endanger lives. The practice is not limiting to just wheat and corn. Tomato, dry beans, melons and even some cotton farmers have utilized the practice. Cardoza said Sustainable Conservation, along with Ag Flex and the American Farmland Trust, are offering incentives for farmers to try the practice. A farmer can sign up for the Best Management Practices program that will pay the farmer the difference should his yield drop off using no till farming.

“They can try these practices risk free. If there’s a yield loss, we cover the loss,” he said. He said his organization also can assist a farmer with the necessary implements and other resources, along with expertise and support.