Clean Seed to Break Ground on New Operations and Assembly Facility in Saskatchewan... 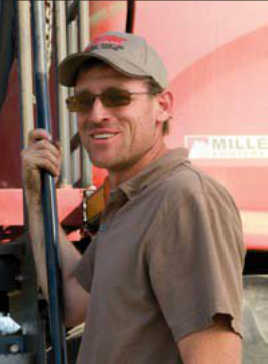 “We get better results both economically and environmentally” - Colin Rosengren

Colin Rosengren Farms near the community of Midale in South Eastern Saskatchewan and has a clear vision for his medium size grain operation, and he cheerfully concedes that his vision isn't the same as his neighbors.
While the other farms in the area have focused on growing in scale, so today they produce the same relatively short list of grain crops on ever increasing acreage, Rosengren’s operation has focused on expanding in scope. New crops like the oil seed camelina have appeared, along with participation in a processing and marketing operation known as Three Farmers Camelina Oil which promises traceability right back to the field of origin.

At the same time Rosengren has developed an intercropping system he says delivers both environmental and economic benefits to the farm. It’s all part of an ongoing search for new and innovative opportunities.

“I guess you could say we’ve gone almost in the opposite direction,” Rosengren Says. “we’ve got more employees, for example, than another farm of similar acreage would, but we have done that because we have other activities, like the camelina oil.”

The primary goal of the farm can be summed up as making better use of biology, something Rosengren says the intercropping system is a good example of. It involves planting complimentary crops together, such as peas and canola. The peas climb the canola, while also supporting it and preventing lodging and even limited seed pod shattering.

“It seems like every plant makes different use of space and sunlight in the field, and we get better results both economically and environmentally,” Rosengren Explains.

Despite his success with the admittedly more management intensive system, Rosengren is still looking for ways to do more with less. His latest interest is perhaps the greatest challenge for the perennially dry region - increasing yields on limited water supply.

“Thats definitely the thing i’m concentrating on the most right now,” Rosengren says.

“it’s a bit ironic I suppose, since we had that season of flooding a couple of years ago, but historically that has been our greatest challenge, lack of water.”

Rosengren says he is not entirely sure what a more water efficient system will look like yet, but it will likely revolve like the rest of the farm around finding biological solutions to more problems. That may mean different crops, different production systems or different equipment to address some of the challenges, much like zero till did a generation ago.

“one of the things we have found is that there are some limitations to what we want to do that are due to the available equipment,” Rosengren says.

In no small part that led to Rosengren’s participation in a new company - Clean Seed Capital Group - which is designing and building new environmentally friendly farm equipment. Rosengren was recently appointed the organization's VP of Agronomic Practices and Protocols.

Rosengren says he believes the company, which holds patents for opener assemblies, in-ground openers and proprietary seed and fertilizer metering systems as well as electronic controls, will succeed in building large scale equipment that is suited to modern, mechanized operations, yet gives better biological results.

Ahead of the Curve