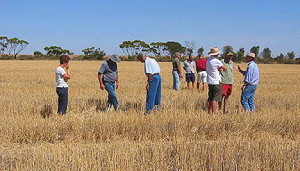 A soil carbon trading pilot scheme in central western New South Wales is moving into its next stage.

About 300 farmers in Canowindra, Manildra and Cudal are eligible to participate in the scheme, which is the first government funded trial in Australia.

The State Government is funding the five year trial, which will be run by the Lachlan Catchment Management Authority (CMA).

Lachlan CMA project manager Alan McGugfficke says about 100 farmers attended workshops over the past month and those that are interested will now have site inspections to determine their suitability for the trial.

He says the project is looking at three specific carbon capturing farm activities to fund.

“The other one is going from either of those systems into a woodland type situation.

“So that would be planting trees.”

He says interested farmers can now move on to the next stage in the process.