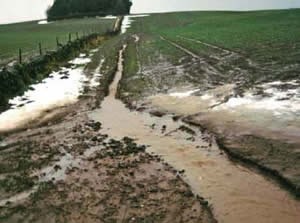 STEVENS POINT – Autumn is at the doorstep again, and across much of the state, corn crops are bursting with promise, soybeans are yellowing out in their patient manner, alfalfa and pasture lands are lush and emerald green.
Grain prices are high, boosting land values and yielding profits for farmers. In a difficult economy, agriculture seems to be thriving. That’s good news for this bedrock Wisconsin industry, at least for the short term.

Not to look for clouds on a sunny day, but the words “short-term” are important markers for some analysts. Earlier this year, the Environmental Working Group issued a startling report. “Losing Ground” began with this ominous note: “Across wide swaths of Iowa and other Corn Belt states, the rich, dark soil that made this region the nation’s breadbasket is being swept away at rates many times higher than official estimates.” The report takes note of the work of researchers at Iowa State University, who are tracking soil erosion in Iowa after every storm that hits the state and collecting data that’s remarkably precise.

EWG’s report deserves attention, and it’s getting it. Craig Cox, the group’s senior vice president for agricultural and natural resources, will discuss it at the kickoff program of the Community Environmental Forum sponsored by the Gaylord Nelson Institute Tuesday, Sept. 20, in Madison. The program starts at 5:45 p.m. in Room 1106 of the Mechanical Engineering Building at UW-Madison.

Some will pooh-pooh the EWG report as the product of an environmental group trying to scare people. But what if a similar warning were sounded by the founder of an asset management firm who has had remarkable success predicting market turns? It has. Jeremy Grantham, founder of the firm GMO, warns of an impending food disaster in a recent New York Times Sunday Times Magazine piece.

While a burgeoning world population will strain resources like oil, metals and water, Grantham says our overuse of other resources is more serious. “Running out completely of potassium and phosphorus (two key elements in fertilizer), and eroding our soils are the real long-term problems we face,” Grantham warns in a July quarterly newsletter. “Their total or nearly total depletion would make it impossible to feed the 10 billion people expected 50 years from now.”

As does the EWG report, Grantham argues that the U.S. is losing ground on erosion. The rest of the world is doing much worse, he adds: “Globally, soil is eroding at a rate that is several times that of the natural replacement rate.” Impacts of climate change will exacerbate the crisis, especially weather instability that will produce more frequent and severe droughts and floods, he says.

Grantham salutes capitalism for its “magnificent virtues in the short term,” but says it cannot deal with the tragedy of the commons that leads to problems like overfishing and erosion. Why? “The finiteness of natural resources is simply ignored, and pricing is based entirely on short-term supply and demand.” And capitalism fails to put a material cost to damage that occurs in the future. In other words, the problems to be faced by future generations because of resource depletion have no material present value. I’m far from an economics expert, but I think he’s telling us that’s bad accounting.

The news isn’t all bad, Grantham notes. No-till farming, for instance, has gained acceptance in the U.S. and South America. It reduces erosion by up to 80 percent, reduces fertilizer runoff, preserves moisture, improves soil and reduces emissions of heat-trapping gases into the atmosphere. But worldwide adoption of no-till is only about 5 percent, he notes, and in the end, Grantham says the trend lines aren’t good.

He predicts the world will end up with a population of between 1.5 and 5 billion, well below that 10 billion cited in most predictions for the middle part of this century. “The only question is whether we get there in a genteel, planned manner with mild, phased-in restraints, or whether we run head down and at considerable speed into a brick wall.”

All of which puts a lot of pressure on the fertile soils of the Midwest, one of the world’s most important agricultural areas.

In the short term, the increased production and higher prices we are seeing now is good news for agriculture in the region. But it must be asked, “What about the future?” If Grantham is right, and if we don’t ask that question, we may be facing the autumn of the world as we know it.