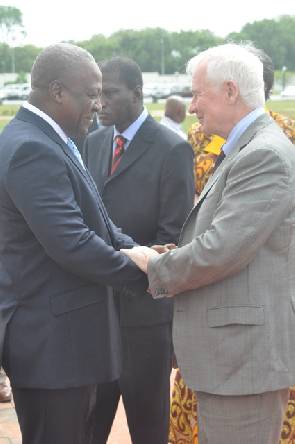 President John Dramani Mahama on Tuesday commended the Canadian Government for continuously supporting Ghana in her development agenda, particularly in health, water and agriculture, over the years.

He said: “Canada through the Canadian International Development Agency (CIDA) has become a household name, especially rural northern Ghana, for its support in the provision of potable water, health facilities and food security.”

President Mahama gave this commendation when he held a joint news conference with David Johnston, Governor General, who is on a three-day working visit to Ghana.

The President said the Canadian Government had also partnered Ghana through the establishment of the Northern Regional Integrated Programme (NORRIP) that ensured that the rural areas were provided with water and health facilities and the promotion of agriculture.

He said the Canadian Government through the Canadian Commercial Cooperation had also supported Ghana in the construction of a thermal plant that had added 130 megawatts of electricity to the national grid.

The President said the Cooperation was expected to support Ghana to complete another 130 megawatts of electricity in the coming months.

President Mahama indicated that the next collaboration between the two countries would be in the areas of rail, sea and aviation transport, and agriculture where Canada had the comparative advantage over Ghana.

He said:"Government spends 11.5 percent of Ghana’s income on agriculture, and it will, therefore, collaborate more with Canada that has tremendous experience in agricultural production.”

Mr Johnston commended Ghana for her strides in politics, governance and economic growth over the years.

“This country is a leader among African Nations. Canada is proud of its ties with Ghana, our partner in the Commonwealth and in numerous spheres of society, and together we share the goal of building smarter, more caring societies and a fairer, more just world. We have many values and aspirations in common,” he said.

Mr Johnson expressed satisfaction that Ghana and Canada were currently collaborating in the areas of post-secondary education, which he said would create an enabling environment for jobs to be created for many school leavers in the country.

“The Canadian organizations are also working alongside their Ghanaian counterparts, to promote volunteerism, and corporate social responsibility… and Canadians and Ghanaians have so much to learn from and offer each other.”

Mr Johnson said Ghana had made solid economic gains in recent years that had been noticed around the world, including Canada and many Canadian firms and enterprises had found Ghana to be a positive place to do business.

Apart from laying wreaths on the tombs of the late President Kwame Nkrumah and his wife, the Governor General also held talks with President Mahama, visited the University of Ghana, and would be leaving for Kumasi on Wednesday.