Momentum Continues To Build In No-till

Sometimes it is hard to imagine that no-till started with 7/10 of an acre in Kentucky in 1962. Like a boulder rolling down hill, it slowly picked up momentum and respect. Now finishing its 50th year, it is practiced on more than 35 percent of the acres devoted to the eight major crops in the U.S., and the momentum continues to build.

“By 1994, there were an estimated 39 million acres in no-till,” said Chad Watts, project director, Conservation Technology Information Center (CTIC). “By 2004, no-till had grown to 62 million acres. In 2009, the Economic Research Service estimated no-till was practiced on 88 million acres.” 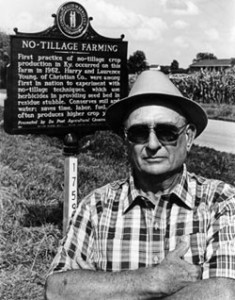 Young stands in front of a marker commemorating his beginning endeavors into no-till farming.From the beginning, it is agricultural retailers who supported and championed the cause, recalled Frank Lessiter, chairman, Lessiter Publications, and long time editor of No-Till Farmer. “They got on board early,” he said. “Willard Chemical, Frederick, Md., was one of the leaders. They got into no-till in the late 1960s.”

Lessiter noted the difference between agricultural chemical companies and equipment companies who saw no-till as a threat to their tillage business. The exception was Allis-Chalmers, who put together the first planter designed for no-till. Eventually other companies got on board as well, promoting no-till planters and drills rather than lose that business to another brand.

Lessiter also got on board early, on staff with No-Till Farmer when it started in 1972. For the past 40 years, it has promoted no-till, holding the annual National No-Tillage Conference and continually spreading the gospel of no-till.

“There were 3.3 million acres in no-till when we started the publication,” recalled Lessiter. “What made it work was when we got Roundup for use as a burndown. Weed control was the big problem. Before that, the only burndown we had was paraquat, which didn’t translocate and would kill anything it touched.” 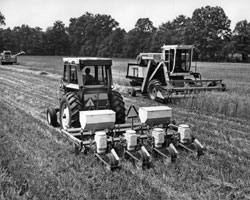 A Buffalo planter was an early way of ridge tilling and no-tilling.Another problem early adopters of no-till faced was peer pressure. No-till farming was called farming ugly. “A lot of veteran no-tillers will tell you they quit going to the coffee shop in those days because they didn’t want to be hassled,” said Lessiter, who helped turn the look of no-till into a point of pride. “No-tillers would send in pictures to a FARM UGLY contest that we held.”

Like others associated with no-till, Lessiter gave the credit for growth to those early adopters and the farmers who followed in their footsteps. “We gave them the ingredients, but the farmer wrote his own recipe,” he said. “The thing with no-till is you can have two guys across the road from each other, each doing no-till his way, maybe one with coulters and one without. They both make it work, but neither could be successful the other way.”

Lessiter noted that when Roundup Ready crops hit the market, no-till took off again. With precision ag and other tools available today and the economic benefits firmly understood, he doesn’t see the trend slowing down. “When you are talking 10,000 to 20,000 acre operations, those guys don’t want to make multiple trips,” said Lessiter. “With a single pass, you don’t want overlaps or skips of chemicals, seed or fertilizer. With precision technologies, you have controlled traffic. You can strip till in the fall, build berms and apply fertilizer and come right back to the berm in the spring.” 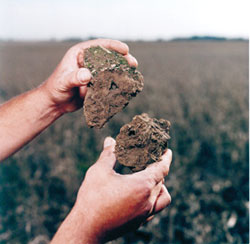 Long-term no-till produces soil with strong aggregation and increased structure. The proliferation of fungi in the soil produces glomalin, which acts as a binder, creating soil structure.Some things don’t change, like attitudes toward no-till, pointed out Lessiter. “Many machinery companies make one planter that fits any system, simply modifying it for no-till. Most don’t make a planter specifically for no-till,” he said. “Chemical companies and ag retailers continue to be important supporters of no-till. Syngenta has been a sponsor of our No-Tillage Conference for all 21 years and Bayer CropScience has been a sponsor for 14 years.”